Trusting the canon without apostolic succession

As a protestant, I reject their claims. But the canon wasn’t formed until long after the apostles died. So how can we trust the canon without trusting the doctrines formed by people in the same chain of succession?

How can we trust the canon without trusting the doctrines formed by people in the same chain of succession?

If you are implying that being certain that the right books form an infallible “canon” depends on trusting that some line of people were always correct in their decisions, I’d agree that we can not be certain of trusting the canon in that way. Of course, it isn’t even clear that all supposed chains of succession endorsed the very same list of books for the canon, much less that they had to have been correct in their beliefs.

In a post-modern world, it seems to me that our evaluations of which persons and books are deemed ‘trustworthy,’ and indeed even what definition we attach to “trustworthy,” must admittedly remain inevitably colored by subjective factors.

I’m not Davo but i used to play him on TV! Anyway i think most of the canon was informally decided in the first century and was read in churches or congregations regularly but a couple like Revelation and Jude were accepted much later. In fact i think both of these were controversial.

How did you reach this belief?

btw did you drink a Fosters while impersonating davo?

Didn’t the reformers “review” the canon collection? And judged the canon was essentially correct, minus a few books - they tossed out? 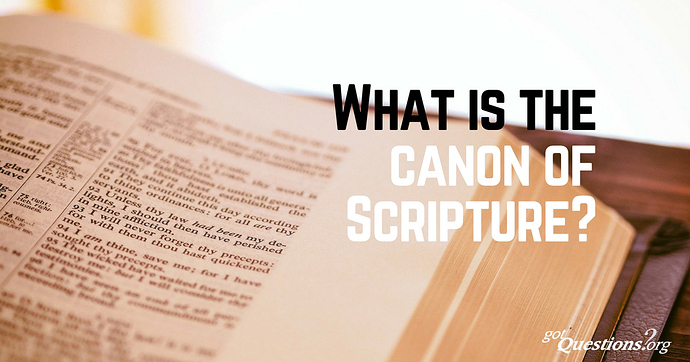 What is the canon of Scripture? | GotQuestions.org

What is the canon of Scripture? Does the Bible even tell us what books belong in the Bible?

The Protestant site Got Questions, summarizes the selection criteria.

To put this in simple terms. Lonnie picks the scripture (AKA RC and EO folks) and the Reformers (AKA woodchucks) OK the wood - but chuck out what’s not needed.

So how can we trust the canon without trusting the doctrines formed by people in the same chain of succession?

I’m thinking it’s not too hard given the Bible came first… it was merely the ordering of the NT that became settled beyond biblical times — the OT was already settled.

So how can we trust the canon

It’s not too hard… it was merely the ordering of the NT that became settled beyond biblical times — the OT was already settled.

Didn’t the canon of Hebrew Scriptures (like the NT one) remain unsettled among Christendom’s branches, differing on the books to include? And isn’t human uncertainty about what to include in the NT canon more than “merely” a Christian concern, since how we interpret and apply the OT is greatly shaped by what we understand as the NT and its message?

E.g. if I accepted a founding Protestant’s view (Luther’s) that James is lousy straw, it’d be far easier to conclude with many that the NT interprets from Abraham’s justification that works are essentially no longer decisive about who among God’s people God’s judgment will justify.

Didn’t the canon of Hebrew Scriptures (like the NT one) remain unsettled among Christendom’s branches, differing on the books to include?

Hmmm… maybe so for Christendom, but the Hebrew Scriptures as Jesus, Paul and Co. knew, used and or quoted stood complete in their day.

…how we interpret and apply the OT is greatly shaped by what we understand as the NT and its message?

That is certainly true… as is evidenced in how some slice and dice from the Old according to their interpretation of the New.

Didn’t the canon of Hebrew Scriptures (like the NT one) remain unsettled among Christendom’s branches, differing on the books to include?

Related to that, we do not have the autographs. Aren’t we relying on the judgment of non-apostles to determine what the apostles wrote?

The Hebrew Scriptures as Jesus, Paul and Co. knew… stood complete in their day.

So which of Christendom’s differing canonical lists did Jesus or Paul pronounce as correct?

So which of Christendom’s differing canonical lists did Jesus or Paul pronounce as correct?

Apart from being impossible given Christendom didn’t then exist, it’s not recorded, as best we know, that Jesus ever pronounced any particular “canonical lists … as correct”.

The ‘Hebrews Scriptures’ are the same as appears as the ‘OT’ in any regular bible though the ordering of books was different — I know you guys already know this.

So what canonical list did Jesus or Paul teach was correct?

I agree, and isn’t such an absence of Jesus indicating the parameters of the Hebrew canon part of what allows qaz to observe that we’re thus dependent on our religion’s human succession to tell us exactly which writings properly comprise a trustworthy Biblical canon?

Or are you assuming that you know that Jesus and Paul authoritatively rejected the books (beyond evangelicals’ O.T.) that Jews and early Christians included in the Hebrew Scriptures, and so implicitly pronounced that they supported Protestantism’s later position on the limits of the canon?

Nah Bob… I’m not running with your extraneous false assertions. I just point you back to my original response to qaz and ask that you read it again carefully in relation to qaz’s quote I was responding to.

@Bob_Wilson and @davo to limit the scope of my inquiry I’m assuming the OT canon is all inspired. Now how do we know each book of the NT belongs in what would become known as the NT canon? It seems like we have to have some faith in apostolic succession, since it was people who succeeded the apostles who chose the canon, no?

@Bob_Wilson and @davo I’m assuming the OT canon is all inspired. Now how do we know each book of the NT belongs in the NT canon?

qaz, good question! I perceive using the term “know” for what is clear about what books should be in the NT canon is also impossible. I.e. we do NOT “know” each book deserves infallible or canonical status. Rather, your earlier term (for the OT) applies that we can only “assume” each portion is ‘inspired.’

I think the difficulty of demonstrating that we “know” is illustrated by Davo’s unwillingness to answer my clear question about how he knows that “it’s not too hard,” and his accusation that I present false assertions, without even being willing to name what those are.

So yes, I agree with you entirely, that it requires faith in the succession of the later church that they were able to infallibly choose the N.T. (& OT) canon, as is generally classically assumed, even by Protestants who reject apostolic succession.

…to limit the scope of my inquiry I’m assuming the OT canon is all inspired.

Qaz… putting Bob’s belligerent baiting aside because he doesn’t like certain responses, that was the scope of my answer to you and so I concur.

As for… “trusting the doctrines formed by people” who followed — IF you can marry what they may have said on a given thing to what you find in the NT and can agree THEN there is nothing stopping you trusting in such, IF you want to… simple! Some such ones taught the likes of Trinitarianism — I’m not convinced from either the Hebrew Scriptures OR the NT. That was the thinking behind my initial response to your original post.

Hope that isn’t too complicated for you to understand.

God can and does use persons who are non believing to bring about his will and greater purposes at times. Therefore, for me personally, it stands to reason that God can use a person/s or a denomination of persons etc … even with errant theology to put together [his] Chosen and ordained cannon of scriptures. Sounds a bit simple, but it works for me.

I like to go back, to this Got Questions article - and quote a bit.

What is the canon of Scripture? | GotQuestions.org

What is the canon of Scripture? Does the Bible even tell us what books belong in the Bible?

When it came to the Old Testament, three important facts were considered: 1) The New Testament quotes from or alludes to every Old Testament book but two. 2) Jesus effectively endorsed the Hebrew canon in Matthew 23:35 when He cited one of the first narratives and one of the last in the Scriptures of His day. 3) The Jews were meticulous in preserving the Old Testament Scriptures, and they had few controversies over what parts belong or do not belong. The Roman Catholic Apocrypha did not measure up and fell outside the definition of Scripture and has never been accepted by the Jews.

Most questions about which books belong in the Bible dealt with writings from the time of Christ and forward. The early church had some very specific criteria in order for books to be considered as part of the New Testament. These included: Was the book written by someone who was an eyewitness of Jesus Christ? Did the book pass the “truth test”? (i.e., did it concur with other, already agreed-upon Scripture?). The New Testament books they accepted back then have endured the test of time and Christian orthodoxy has embraced these, with little challenge, for centuries.

Confidence in the acceptance of specific books dates back to the first century recipients who offered firsthand testimony as to their authenticity. Furthermore, the end-time subject matter of the book of Revelation, and the prohibition of adding to the words of the book in Revelation 22:18, argue strongly that the canon was closed at the time of its writing (c. A.D. 95).

There is an important theological point that should not be missed. God has used His word for millennia for one primary purpose—to reveal Himself and communicate to mankind. Ultimately, the church councils did not decide if a book was Scripture; that was decided when the human author was chosen by God to write. In order to accomplish the end result, including the preservation of His Word through the centuries, God guided the early church councils in their recognition of the canon.