Do honor centered concepts of justice have any validity

I would best explain honor centered concepts of Justice as concerned about who was offended, where our more egalitarian forms of justice are more concerned about what the offense was and how it caused harm. If anyone knows where I am going with this, this is over the idea that an infinite sin against an infinite being merits infinite punishment. I know this has been addressed, and there are many conclusions brought up. I have heard the responses A) that the scriptures in the Old Testament Law are more concerned about the nature of the offense than who it was against, as was the standard held by old testament kings. In fact, an orthodox bishop claimed that retributive views of Hell were influenced by medieval honor codes. B) The nature of the offense is not about offending God, as he is completely whole, perfect and incorruptible, and therefore cannot be truly offended, or this would make God no different than a demiurge. However, the infinite wrong hypothetically would be the ultimate nature of sin, which willingly done are an ultimate no to God, and the source of all life. C) Even so, nothing can be earned, as even our own existence is all gift not of our own merit, and even if our own merits could only damn us, Gods mercy is still superior. Not that this makes mercy any less necessary than justice.

Now getting back to the point, I have found that most Universalist thought accepts the validity of more distributive/restorative forms of justice, where one only is obliged to set things right. For example, I remember an analogy of accidentally destroying someone’s property, that the person would be obligated to pay them money to have their property fixed. This seems to be most in line with more modern concepts of social justice. Now I remember reading in a Catholic book arguing for limited libertarian government that in many overarching states that make too many laws for compensative justice often lead to debts being owed to the government than the person harmed. This would be similar to the question is if something like theft would be unjust because its illegal(honor centric) or because it is harmful to another(restorative justice). On a societal level, the problem I recognize in honor centric justice is that it makes offenses too subjective, and can impose a guilt sentence just because the wrong person got offended. Yet I wonder if on the cosmic level this could be so dismissed.

There’s nothing immoral about retributive justice. Here’s an excellent new book that I purchased that gives a justification for retributive justice. Retributive Justice protects. Punishment is essentially a defense of the honor of the victim. It restores dignity and honor. The book is over a hundred dollars but well worth the price. Here’s the description on the back

This book addresses the problem of justifying the institution of criminal punishment. It examines the “paradox of retribution”: the fact that we cannot seem to reject the intuition that punishment is morally required, and yet we cannot (even after two thousand years of philosophical debate) find a morally legitimate basis for inflicting harm on wrongdoers. The book comes at a time when a new “abolitionist” movement has arisen, a movement that argues that we should give up the search for justification and accept that punishment is morally unjustifiable and should be discontinued immediately. This book, however, proposes a new approach to the retributive theory of punishment, arguing that it should be understood in its traditional formulation that has been long forgotten or dismissed: that punishment is essentially a defense of the honor of the victim. Properly understood, this can give us the possibility of a legitimate moral justification for the institution of punishment.​ 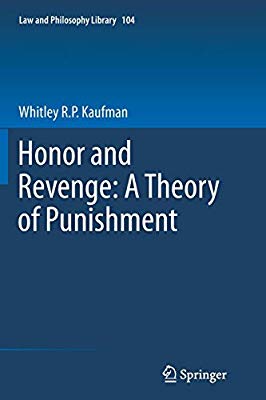 Honor and Revenge: A Theory of Punishment (Law and Philosophy Library)

God’s justice is Holy. The orthodox view is that of Robin Parry in 4 views on Hell. It’s both retributive and restorative. To be holy means to be set apart and special. It’s to be distinct. Holiness when applied to God not only refers to moral purity but to everything that separates God from His creation and His creatures. So, while God is love He’s holy love. His justice is a holy justice. We see this justice at the cross. At the cross we see Holy justice. What is unique about this justice is that it produces resurrection. The justice at the cross is suffering, death, and then resurrection. It’s judgment followed by resurrection. The Bible says Christ learned obedience through what He suffered. Therefore, the retribution at the cross includes disciplinary and restoration and resurrection. This is God’s holy (unique) justice. He kills but makes alive. That’s holy justice. It includes retribution. This happened in 70 AD also known as the Days of Vengeance. These days are completed and over with. We shouldn’t use retribution anymore but more along the lines of a healing circle or rehabilitation. The Days of Vengeance was God executing His justice on the Jews for the crucifixion of Jesus. It was suffering death and resurrection. Judgment Day is over and therefore so is Vengeance. The new heavens and earth began in 70 A.D. but still hasn’t reached it’s full consummations yet. That is to say, the new heavens and earth began in 70 AD but hasn’t fully developed or worked itself out. I believe things have been slowly improving since the NT times and 70 AD destruction. There are setbacks but It will overall continually get better and better until the full consumation of the new heaven and earth where there will be no more death or suffering.

More quotes from the book on Retributive Justice:

We have argued that the central purpose of punishment is to restore dignity, self-respect, and honor to the victim, by demonstrating that society does not passively acquiesce in the crime but is willing to risk even life and limb in response to it on behalf of the victim. The goal of defending the honor of the victims seems to be morally unobjectionable even to critics of punishment, and it seems to be more reasonable to expect that retributive motive will always be with us - or as Sharon Krause argues, that we need to preserve the motivation to defend one’s honor, a motive on which our liberties depend. Indeed, we have argued that virtually every current theory of punishment has an underlying retributive motive. ~~ page 190

The case for the essential continuity and even identity of revenge and retributive punishment is overwhelming, The two words are dictionary synonyms and are more or less interchangeable; if the revenger demands “retribution” we would not have any doubt about what he meant (nor would we ever think that he was referring to an entirely different conceptual system of punishment). As Zaibert points out, when in the Bible God says “Vengeance is Mine,” it is clear that He means retributive punishment, not sadistic pleasure. Both the revenger and the punisher aim at “justice” ~~ page 106

I agree that you made a good case for retribution. The major problem I have seen with retribution occurs when the punishment exceeds the offense. Not to get too political, but much of my issue I have with big government is that they inevitably take the penal system further than the offense committed. Essentially I am a Libertarian because I find that they are the only ones to know the just use of coercion, which only occurs when forms of coercion or violence were used on another citizen. Even if there are other immoral actions that are not violent, there is still no justice using violence against such vices like gossip, pornography, infidelity, greed, hate speech, drunkenness, dishonesty, self righteousness or other such vices. Yet it seems like any time Government tries to regulate personal vices, whether it comes from the right or left only creates a resentful people who end up losing all respect for the legal system. And I hate to say it, but the legal system does not deserve respect if it punishes non-violent offenses.

Getting back to the point, it is pretty clear that justice should be in proportion to the offense committed. Yet I have wondered if people too easily judge justice based on the results or who was offended. But there seems to be something to the whole matter of who was offended. Like it is morally reprehensible to show disloyalty to someone one is close to than a service provider. I can see it being horrible to cheat on a spouse if one gets tired of them, but nothing wrong about changing barbers, doctors or electricians if the previous one is not doing a good job. I am not sure who it was who said it, but a friendship is a living thing, and disloyalty, whether to a loved one, spouse or friend is a kind of murder. Where such reciprocal relationships are in no way personal, and are only justified on their utility. Now running into an old service provider can be a bit awkward.

Sorry, I got off subject again. I was just thinking out loud. But I think the point over who is offended is moot, as the offense still depends on the relationship broken. But back to the subject, I find that much of the way justice gets exceeded occurs when the consequences to an action are worse than the action itself. Even if one did no evil action, evil can still occur. Hence the idea that the ends does not justify(or condemn) the means. Yet this brings up the question of why anything should be prohibited, which has traditionally been justified on grounds of avoiding harmful situations. But this may only work on legal/ethical grounds, where the concern is not so much on ones individual virtue, but on the good of the community.