In a discussion of the comparisons of nomadic and farming societies in ancient times, the author points out an interesting comparison of the ‘gods’ that were worshipped.
Is there a ‘feminine’ aspect of the Father?

Nomadic culture was based on 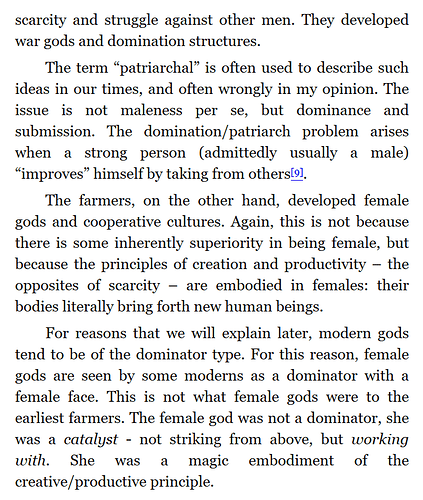 from Production vs Plunder, by Paul Rosenberg. (free on Kindle unlimited!)

Is the god worshiped by Christians a nurturer, a provider, is he fecund, does he work with us or strike from above’ is he a creator or a plunderer?

Is there a ‘feminine’ aspect of the Father?

“having qualities or an appearance traditionally associated with women, especially delicacy and prettiness.”?

Sorry, Dave, my lower jaw is still aching very badly from the attack on it by my lady dentist. She may be pretty, but not very delicate when wielding instruments of torture.

I trust that you will therefore compassionately forgive me if I do not show any interest in discussing this provocative question you are posing.

Well, ‘prettiness’ was not exactly what I was hoping to discuss, but I certainly do feel some compassion for the pain in the jaw of an a…wait, I mean, for your hurting jaw. That was a lot of dental work in one day. Gads.

in the jaw of an a…wait, I mean, for your hurting jaw

Not fast enough, Dave. I know exactly what you were going to say.

Using the word ‘feminine’ in the OP was perhaps a bit of a troll. I did want to draw attention to our concept of God, and how we think of Him. Do we rest in the fact that he is a comforter, a nurturer, one who wants us to flourish in our creativity, in our love, in our charity, in our dialogue? Or do we think of such an exalted and all-powerful being, so much ‘the other’, breathing forth threatenings continually?
And how does that thinking affect our relationships to the world and to others, and to God himself?
I find the questions very interesting.

He further goes on to say: 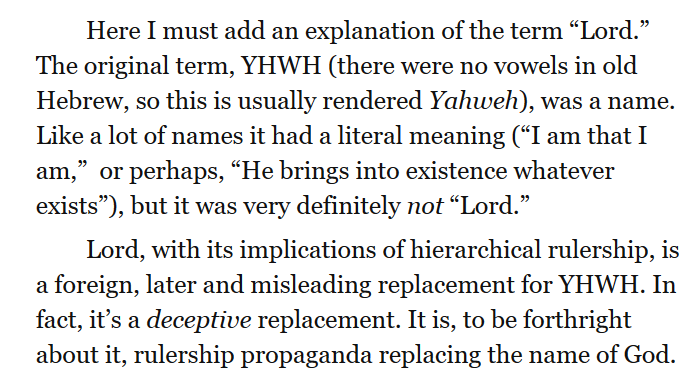 The early Hebrews wanted to make certain that they would not take the divine name in vain. For that reason instead of using the divine name, they substituted “the LORD”—not “the Lord” but “the LORD.”
We refer to Jesus as “the Lord” (which He is).

However, Justin Martyr taught that the Father and the Son shared the divine name.

Gen 19:24 reads:
Then the LORD rained on Sodom and Gomorrah sulfur and fire from the LORD out of heaven.

Justin taught that the sulfur and fire originated from the LORD in heaven, that is from God the Father, but that the Son of God, the LORD on earth, that was the means by which that act came about.

Ex 20:7 "You shall not take the name of YHWH your God in vain, for YHWH will not hold him guiltless who takes his name in vain.

Ex 20:7 "You shall not take the name of YHWH your God in vain, for YHWH will not hold him guiltless who takes his name in vain.

It’s a rather moot point Chad considering such texts like the other one used above (Gen 19:24) gets trotted out to make some complimentary point AND YET the very text itself completely mitigates against another cherished claim that… ‘neither the Father nor the Son kill anybody’ — well just look at the text…

Gen 19:24-25 Then the Lord rained brimstone and fire on Sodom and Gomorrah, from the Lord out of the heavens. He destroyed the whole valley—all the cities, the people living in the cities, and all the plants in the valley.

It’s a rather moot point Chad

You may be right, but the context is still valid. Do we consider what was written in the bible applicable to us today, or are we chasing a whispering wind? I realize David you hold very dear the idea that the bible (scriptures) are married to everyone, but I tend to think that belief is what it is.

I appreciate your position and have learned much from it, and will continue to do so,

Here’s some notes I once made about the figure of Sophia in the Hebrew and Christian Testaments. They may be useful - but then again, they may not be

WISDOM IN THE OLD TESTAMENT

‘Wisdom’ appears in the Hebrew Testament –both in the Masoretic Hebrew text and in the additional books of the Greek Septuagint translation (that were also seen as inspired by the first Christians). Wisdom, Chokhmah (Hebrew), Sophia (Greek), Sapienta (Latin) is the feminine personification of God’s presence and creative and redemptive activity in the cosmos. Wisdom is the pattern that connects in all things. ‘She’ speaks and is spoken of in terms of ‘delight’, warm hospitality, friendliness towards human beings etc…, and – very beautifully – as a fine mist rising.

‘’ When he [the LORD] established the heavens, I was there; when he drew a circle on the face of the deep, when he made firm the skies above, when he established the fountains of the deep, when he assigned to the sea its limit, so that the waters might not transgress his command, when he marked out the foundations of the earth, then I was beside him, like a master workman, and I was daily his delight, rejoicing before him always, rejoicing in his inhabited world and delighting in the children of man.’’ (Proverbs 8: 22-31)

‘’Wisdom is a spirit friendly to humanity’’ (Wisdom of Solomon 1:6)

‘Like a fine mist she rises from divine power, a pure emanation of the Almighty’s glory, and nothing impure can enter her, even stealthily. She is the reflection of the everlasting light, the flawless mirror of the divine power, and the image of his goodness… She spans the world from end to end in power, and orders all things well.’’ (Wisdom of Solomon – Chapter 7)

JESUS AS ‘FEMININE’ WISDOM IN THE NEW TESTAMENT

‘What the Jews said about Wisdom, the early Christian hymn makers and epistle writers now came to say of Jesus; he is the image of the invisible God (Colossians 1:5); the radiant light of God’s glory (Hebrews. 1:3); the firstborn of all creation (Colossians 1:15); the one through whom all things were made (1 Corinthians. 8:6). Likewise, the way in which Judaism characterised Sophia in her dealings with human beings, Gospel writers now came to portray Jesus; he calls out to the heavy burdened to come to him and find rest (Matthew. 11 28-30); he makes people friends of God (John. 15:15), and gifts those that love him with loafs (John 17:2)’’

‘’Now the idea that Wisdom is the saviour is also present in the New Testament. An explicit statement is found in 1 Corinthians 1:24: ‘’Christ, the power of God and the wisdom of God.’’ It is implied in Colossians 1: 15 – 20, with its allusion to the creative role of Personified Wisdom described in Proverbs 8. The Proverbs text must also lie at the very heart of the first chapter of John, even though the word ‘Sophia’ (=wisdom) is replaced by Logos (=reason).’’

Thanks Dick! Hope all is well with you!