Genesis One & Two… an alternative reading

I’d like to “float” an alternative view in the broader creation debate.

As I understand it… Gen1 describes in real terms God’s creating or preparing of… a land for real people on the local plane, i.e., Israel, with Gen2 having an allegoric-come-metaphoric covenantal application behind the more literal account of Gen1… thus being the deeper or greater story behind the very literal happenings as recorded in Gen1. As such these chapters can be viewed in localised terms pointing proleptically towards the beginnings of Israel proper.

Having said that, as I presently see it… “the heavens and the earth” of Gen 1:1 could encompass a standalone title reference relative to our physical time-space universe, though this is NOT a necessity of this view; there are of course other biblical texts indisputably proclaiming just this. Thus Gen 1:2ff simply being descriptive in somewhat more vivid terms of the creation of the Promised Land (Eden-Palestine) wherein the promised people (Adam-Israel) began, and so the story unfolding accordingly.

As such the landscape of Gen1 is descriptive of a regional domain which acts as the backdrop or supporting props to Israel’s creation story. Of themselves these props were actual, but from these is derived by way of allegoric application the richer or deeper covenantal story of Israel’s origins. As it is… nothing in the Gen1 creation account speaks to any old OR young earth premise; IOW… the material or corporeal creation of Gen1 is but the lower or base layer wherein a top layer of covenantal creation in Gen2 takes shape and operates, i.e., one simply facilitates the other. However, this lower level need NOT be misunderstood according to so-called scientific nuances of “origins” wherein it is typically framed, but rather… solely descriptive of and applicable to the corporeal land (Eden—Palestine) being prepared or created for a covenanted people (Adam—Israel).

Now as an aside step… on the creational level it would be neither inconsistent nor illogical then to view a subsequent localised flood, again meted out quite literally at a local level (Gen6-7), being a fully covenantal judgment against an obstinate people. Again, such a scenario would be in kind with the local and creative act for the same literal and covenant people, as per Gen1 and as such both these EVENTS full of purpose and filled with function.

So my position then is to acknowledge BOTH the local and covenantal aspects of the Gen1&2 story. Again, as I understand it — a local flood somewhat replicates a local creation preceding it — from the deluge of destruction or reformation came new life. This view fully accepts the relevant hyperbolic and prophetic descriptions and designations found later in Israel’s prophets, realised as an all-important underlying redemptive narrative.

In like manner this view accepts Jesus’ very local and corporeal death, burial and resurrection as encompassing the deeper and more important broader covenantal reality that wrought Israel’s redemption and subsequently humanity’s reconciliation. And again this is eschatologically consistent with viewing the tail end of God’s redemptive story — the ending of the old covenant world in the destruction of Jerusalem — thus BOTH Christ’s cross and coming were very literal and local and yet full of covenantal enterprise. This whole scenario does NOT have to be framed as one against the other, but rather… we have one BECAUSE OF the other, i.e., they are inseparable. In fact, to deny one is to diminish the other.

Now to a little more detail… Gen1&2 can be viewed in terms of the formation of Adam-Israel out of the chaos of darkness aka… humanity lost in ignorance, into those in whom the light of God’s presence and revelation was to shine — something that was to be inherently filled with blessing of creative order. This again being the story within the story — where the chosen are appointed in divine election to serve in terms of dress and till the wider creation; thus understanding the literality of the Gen1 creation account though vivid, yet quite true-to-life, being descriptive of the formation or birth of Adam-Israel in the Land of Promise, aka Eden-Palestine.

The creation language of Gen1 is descriptive of the clearing of a desolate wasteland via a flood so it would become viable and habitable for Adam and his Israelite progenies to whom the Land would be given by way of divine fiat and promise… to be realised through Abraham (Gen 12:1-8; 17:1-8 et al).

At the time of ‘the beginning’ (Gen 1:2ff) the Land was flooded, not dissimilar to that of Noah’s time; the waters recede and the Land is prepared for new life to begin. These days of creation describe this time of clearing rains, storm clouds and flooding waters, so that the Land would become a place where vegetation, animals, and Adam could live, prosper and propagate:

Read in this fashion the account of “creation” like the account of “Noah’s flood” reads in the sense of being both local and literal and yet as with the “destruction of Jerusalem” (from a fulfilled perspective) can have a deeper covenantal application beyond just the surface level rendering of the story; where in time Israel, like Adam, being chosen and taken from among… “all the peoples on the face of the earth” Deut 7:6, i.e., “the dust of the ground” to become God’s vice-regent servant-nation of kingdom priests, as per… Ex 19:5-6 to impart God’s blessings to the world beyond (Gen 12:3) from whence they were first taken.

Isa 43:27 Your first father (Adam) sinned, and your mediators have transgressed against Me.

Hos 6:7 But they (Israel) like Adam have transgressed the covenant: there have they dealt treacherously against me.

It would seem reasonable to conclude that these passages are covenantal and indicative of the Adam-Israel link… hence did the death reign from Adam to Moses i.e., Israel. IOW… just as Israel was to represent and function as God’s microcosmic firstfruits (Jer 2:3a) on behalf of the broader macrocosm of man, so too within the creation story itself is Adam the microcosmic representative leading into the macrocosmic story of Israel.

Deut 32:8 When the Most High divided their inheritance to the nations (Gen 11:8), when He separated the sons of Adam, He set the boundaries of the peoples according to the number of the children of Israel.

Remember, this reference to Israel speaks of the time well BEFORE the call of Abraham, from whom in Jacob such came to be named. It should also be noted that this phrase… “children of Israel” in the above verse is also variously translated in different texts as… “sons of God” — another designation for Israel; and also as “angels of God” — angels are messengers and Israel was to be God’s servant “messengers” to the wider world.

It is also worth pointing out in the above passage this ‘The Song of Moses’ is all about Israel, of which in describing such in the following verses 10 & 11 uses very much Genesis-like creative language relevant to Israel’s inception — words like “wasteland” and “wilderness” and “hovers over” all akin to Gen 1:2.

So in conclusion… this proposition could likely fit the mind-scape of the ancients’ geocentric world in the recounting of their story as the ancients’ had something very tangible and firm to grasp and understand.

Now I’m not saying the above is absolute and water-tight but IMO is feasible. These thoughts above are not posted this to cause affront but to simply say “I can see” various aspects of both sides of a relevant and valid conversation that doesn’t require so much a dogmatic “either/or” approach, but rather a “both/and” consideration — again this is just my opinion, but I am indebted greatly for this by Dr. John Sailhamer’s… Genesis Unbound. 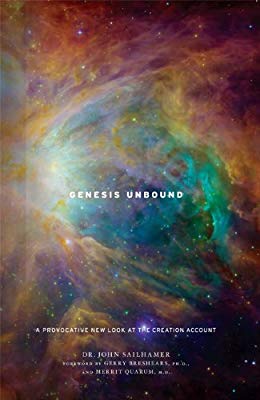 Genesis Unbound: A Provocative New Look at the Creation Account

He does indeed, which is what I mention over here…

Davo could you elaborate on that a bit - seems like an interesting thought. So mik… my approach, like on a few things, might be a little out of left-field but not necessarily unique to me. I do agree with Peter Enns’ thoughts that… Adam is Israel, or proto-Israel. IOW… the overall creation account is the story in micro / macro form of Israel, and in particular here, the birth or origins of Israel reflected in the Adam account etc. I doubt however if Enns himself would take my particular app…

Good stuff, gotta think about it.
But davo - writing about the flood, you say you’d like to FLOAT a theory; but it might not be WATER-TIGHT? Good ones!

It sounds like you think there was a pre-Adamic flood. After the flood God created Adam as a particular region of the earth’s first person, but not the first person on the planet; there were other people who populated different parts of the earth, outside Eden. Is that correct?

Davo, it’s not 100% clear to me if you think Adam was a real person. Am i correct to infer that you think he was? If not, how do you explain the genealogies?

I think he was a real person, but like I’ve pointed out previously… I think there is scope for viewing Adam in one sense as one views King Arthur, i.e., there is a grey area between where legend and literality might meet and depart and yet no one knows where exactly that might be; but apart from that, Adam appears to be a composite figure for Israel, or as Enns has it… “proto-Israel” — the micro of the macro etc.

It sounds like you think there was a pre-Adamic flood. After the flood God created Adam as a particular region of the earth’s first person, but not the first person on the planet; there were other people who populated different parts of the earth, outside Eden. Is that correct?

Yep pretty much… “Others” negates the need for the logically suggested incest with regards to Adam’s AND Noah’s families etc.

Adam can be seen as God’s first covenant man, i.e., he was the first to be made in His image… in the sense of Adam receives His divine stamp (image) of approval. Those called in Adam, i.e., Israel, were duly infected by Adam’s sin, even though they hadn’t sinned according to his specific likeness (Rom 5:14), and yet it was however that Adam’s sin entered his world and thereby the death (Rom 5:12) spread to all Israel — one reason why all Israel needed redeeming, as per Rom 11:26-27.

For sin to gain entrance into Adam’s world, i.e., Israel’s world it HAD TO BE a present reality — something that doesn’t exist can’t gain entrance. With Adam-Israel came law and that is when imputation of sin became a reality, not before (Rom 5:13.)

Only Israel was under the Law and no one else (Rom 3:19; Heb 9:15) — but the rest were however made accountable to God (Rom 3:19) because of Israel in that they Israel became God’s yardstick; particularly so in terms of what His calling could bring in terms of blessing, and the reality was… anyone in the time of the old covenant could join Israel, not initially, but eventually that is exactly how God brought it to be, e.g., Isa 56:3-8.