Ink - a strange and moving film

Some reviews from IMDB: 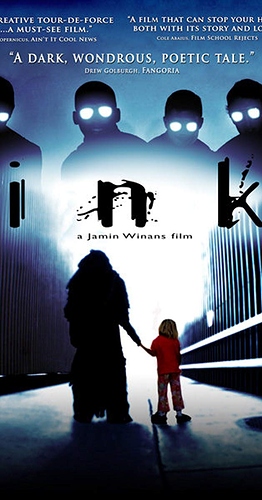 This is typical, and just about what I would write also:

A bold, rich and very remarkable film. This is art, not entertainment. Story: This little movie defies easy categorization; there is nothing quite like it that I am aware of. For students of literature, you will find connection to the work of Dante – in particular, The Inferno – and other works that portray a human being losing his/her soul, for that is what this movie is about. There are philosophers (Rudolf Steiner)who believe that the world is literally divided into overlapping, parallel worlds populated by forces of dark and light (not good and evil) where each side works continuously to influence human beings leaning in one direction or the other – the demon lying upon us as we sleep, feeding us nightmares; the angel gently stroking our forehead, comforting us as we face our deepest fears. This is an epic and continual battle in which the darkness in the world comes from those of us who have committed treasonous acts against our own humanity and suffer, in proportion, consequences for having done so. In film, I would group this with movies like Renee Missel’s Resurrection or Blatty’s totally brilliant Ninth Configuration. But bear in mind that you are watching an INDIE, which means lim ited money to make the film. Therefore, production values suffer at times: there are weak special effects, low budget costuming, limits to cinematography, etc. These should be easy to overlook given the scope and depth of this work. Jamin Winans has crafted a minor masterpiece. The ensemble acting is uniformly superb, but Mr. Kelly carries this film with a deeply felt and gifted performance. Though the story may be difficult to follow because of its unique and complex subject matter; in fact, it is tight as a drum with virtually every shot and edit building on those that preceded it, but it will take a second viewing to discover this. The direction is very fine: the film absolutely has a look and feel expressive of its content. The use of off-color green was effective and quietly disturbing, as was the black ink-like flow covering the protagonist at specific moments throughout the film. At a time when our entire culture is in danger of losing it’s soul, when so many are seeking insight into something deeper and truer, this film could not be more appropriate. INK is what Independent films are supposed to be: intelligent, deep, inspired, rich, genuine, quirky, imperfect expressions that Hollywood could never make or would simply ruin because of commercial pressures. Mr. Winans – thank you.

There are of course some 1/10 reviews. But not many.