New to the group... Lenten Hymn

I wrote this poem during Lent last year, and while I didn’t delve explicitly into universalism the allusions to Origen and Julian of Norwich definitely show my hand. If any of you are interested in more of my poetry, which often deals with universalism in one way or another I have it collected at my website - St. Jude’s Tavern - Poems. Anyhow here’s the poem, I hope you enjoy:

Midwinter frost on the predawn window peers out into darkness
through the mists of time to Sinai’s mountain;
where the darkness of God roars from the secret place of thunder,
the sound of boulders crack and tumble over the cobblestones of
a storm-tossed shore.
Moses recalls the consuming Fire of the bush unburned,
awaiting a greater Light to blaze in the darkness.

Lenten snow blankets the pocked mounds and craters
on the field of Verdun,
forgotten bones lay in frozen silence beneath,
their cries unable to break the ground above.
The raven call in the surrounding wood beckons his flock to feed
on the carrion of a nameless beast.

The red dust and blood-stained sepulchers in the Valley of Vision
full of rusting bones that tarry –
watchmen in the long night for dawn’s breaking,
to hear Ezekiel’s divine utterance –
the alchemy of Aionian fire to purge and quicken their frames
with flesh unalloyed, golden, drossless into undying Zion.

Jude, whose brow was crowned with Pentecostal fire,
whose tongue uttered ecstatic songs we long to sing,
remember us who wander lost in the hopeless wastes
perceiving only darkness and thunder on the holy hill,
pining to behold that Fire within.

Origen, who now reclines at the celestial banquet to feast on grace,
help our hearts bear the bitter truth in the wilderness we now trod –
that which is most beautiful is most maligned.

Julian teach us the behovliness of this broken world,
that soon, soon the Aionian fire shall make
all manner of things well
and burn away the rot that wracks all that is wretched within.

Good Shepherd gather your lost on a thousand hills to the lonely peak of
Golgotha;
Let us at last hear the seraph’s song that kindles joy in the hearing;
Until at long last all creation is alight with unceasing incandescence of
Pentecostal Fire.

I enjoyed the poetry. I used to write but not so much anymore.

Pick it back up!!! Writing poetry is a wonderful exercise for the soul.

You are much better at poetry than I am. I remember taking a class on poetry, at the College of Dupage. I asked the professor:

Should I put more fire into my poetry?

No, it should be the other way around.

Thank you for your kind comment.That’s cool that you spent some time at CoD, I lived in Chicago for about 5 years while I was at Moody Bible Institute. I loved learning there, but I wasn’t much of a student and I chaffed at the strict rules - I bartended through much of my time as a bible college student and went to class hung over plenty of times. Needless to say I wasn’t evangelical pastor material. But, I did get the chance to run in the circle of several talented writers, artists, and musicians that I met in the city - we all met in a cool cafe that was a lot like the salons of Paris where Hemingway, Fitzgerald, and those chaps explored art, beauty, philosophy, etc (not to say we were of that caliber, but the vibe was like that). They had a huge influence on my creative writing - and were the kind of people that made me begin to question a lot of things surrounding universalism, even though it took me the better part of 15 years to cross that bridge completely…

Anyway, to your comment, I don’t thing poetry or any creative exercise is about being ‘better’, its about the act of creation. For Christians, even if they aren’t writing overt Christian material, I find it to be an act of both devotion and a meditation on the goodness and beauty of God and the superabundant overflow of the gift he has bestowed on creation, and us as individuals. Poetry is a way of connecting with God, and by extension what he has made. As to the mechanics, I would say read a ton of poetry, pay attention to the way they use language, imagery, metaphor, etc. these are the vessels to carry emotion. There’s nothing wrong with writing overtly ‘emotional’ poetry, but part of honing the craft is finding creative ways to express it, a subtle image can carry a lot of power - I think of TS Eliot’s ending of Four Quartets (deals heavily in both human brokenness and universal hope), where he culminates the message embedded in the poem as ‘until the fire and the rose are one’ - which a purgatorial image that speaks of the consummation of grace to all creatures. All to say, your professor is right, all poetry is touched by fire, and that fire is in you. The fun part is learning how to put that fire on paper - the trick is to keep at it and write, write, write.

My problem has always been being my own worst critic. Ill write, hate what i write and throw it away. And more over I used to write to get out what i do not want to think about or feel anymore, but in that very act would only concentrate more on that pain or thought in which i wished to dispose through writing.

I brought up a point yesterday on a secular music post here. I believe, even unknowingly, most of all art is giving tribute to God. Even very atheistic songs to me sound more like a lamentation than a denial of God. Both heartbreaking and relatable when in my times of doubt or fear or impatience. One of my favorite albums is “on letting go” by circa survive. From my understanding it was an album in which, unfortunately, the lead singer questioned and gave up his faith in a God, whatever those beliefs may have consisted of. On an unrelated note i think that people often question or deny God based on the character He is presented as. I know personally one of the biggest things I had trouble understanding when i was agnostic was a God presented to me as love who also had most of His creation tormented without end. I think, though this is only speculation based on the lyrics and my interpretation of them, this was a big reason anthony green of circa survive gave up on God.

Hi St. Jude’s Tavern. I like that name and I like St. Jude. He’s my patron saint and the saint of lost causes and hopeless cases. I like clowning around here. As it’s part of the Eastern Orthodox/ Eastern Catholic, Holy Foolery tradition.

I’m also an artist at heart. I took several creative writing and literature classes at COD. And it’s good to see someone here…who knows who TS Eliot and Hemmingway are. Both of them are favorites of mine.

So let’s all share a virtual toast, at St. Jude’s Tavern. And talk about theology, religion, art, and philosophy. And sing a couple of songs together.

Im not one to look for a patron saint. But man if there was any then i assume id most look towards the saint of lost causes for sure!

Well, you don’t have to view him - as a patron saint. Or even a saint. Ever though he’s considered one, in every Christian church that has them (i.e. Roman Catholic, Eastern Orthodox, etc.). For Protestants, he’s one of the 12 apostles.

“But you, beloved, build yourselves up in your most holy faith; pray in the Holy Spirit. Keep yourselves in the love of God and wait for the mercy of our Lord Jesus Christ that leads to eternal life.” (Jude 20-21)

St. Jude is the Patron Saint of Hope and impossible causes and one of Jesus’ original twelve Apostles. He preached the Gospel with great passion, often in the most difficult circumstances. Through the power of the Holy Spirit, he made profound differences in people’s lives as he offered them the Word of God.

The Gospel tells us that St. Jude was a brother of St. James the Less, also one of the Apostles. They are described in the Gospel of Matthew as the “brethren” of Jesus, probably cousins.

St. Jude is traditionally depicted carrying the image of Jesus in his hand. This recalls one of his miracles during his work spreading the Word of God. King Abagar of Edessa asked Jesus to cure him of leprosy and sent an artist to bring him a drawing of Jesus. Impressed with Abagar’s great faith, Jesus pressed His face on a cloth, leaving the image of His face on it. He gave the cloth to St. Jude, who took the image to Abagar and cured him.

After the death and resurrection of Jesus, St. Jude traveled throughout Mesopotamia, Libya, and Persia with St. Simon preaching and building up the foundations of the early Church. St. Jude died a martyr’s death for his unwavering faith. His body was later brought to Rome and placed in a crypt under St. Peter’s Basilica. 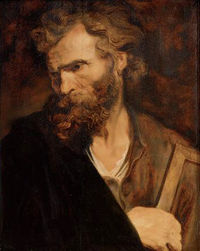 Jude, also known as Judas Thaddaeus, (Greek: Θαδδαῖος; Coptic: ⲑⲁⲇⲇⲉⲟⲥ; Syriac/Aramaic: ܝܗܘܕܐ ܫܠܝܚܐ) was one of the Twelve Apostles of Jesus. He is generally identified with Thaddeus, and is also variously called Jude of James, Jude Thaddaeus, Judas Thaddaeus or Lebbaeus. He is sometimes identified with Jude, the brother of Jesus, but is clearly distinguished from Judas Iscariot, the apostle who betrayed Jesus prior to his crucifixion. Catholic writer Michal Hunt suggests that Judas Thaddae The...

In the Roman Catholic Church, he is the patron saint of desperate cases and lost causes.

Maybe the Beatles will sing, for St. Jude in heaven. In the meantime, I sing this song:

That’s kind of what my website is supposed to be about - St. Jude’s Tavern is inspired by a bar in downtown Chicago where we’d discuss all manner of things. I also slipped the tavern into my novel, now if only I could find a publisher willing to take on universalist apocalyptic literature… the odds are slim. But, yeah St. Jude is very important to me and I’m a protestant not typically predisposed to praying to the saints. I’ll admit, though I’ve asked him to pray for me from time to time when things get really bleak.

You could try pilkington and sons/studyshelf. Depending on what the material teaches, im not sure how stern the are about what they publish, they may publish it.

Our plesance here is all vain glory, ( plesance= pleasures)
This fals world is but transitory,
The flesche is brukle, the Feynd is slee; (bruckle=brittle slee=sly)
Timor mortis conturbat me. (The thought of death troubles me) 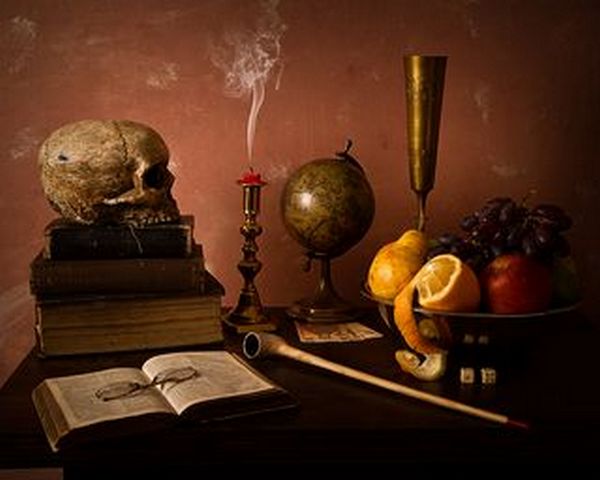 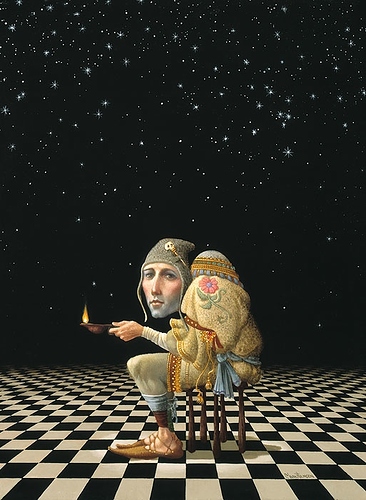