Sinners in the Hands of an Angry God

I’ve been reading Sinners in the Hands of an Angry God and it’s making more sense. You have to read it all and put what Edwards is saying in context. I don’t see the irrationality of it. If your heart is separated from all redeeming mercy it hardens. As a result you will not want heaven. The longer your heart is separated from such grace the harder it becomes and therefore the more wicked. The torment in hell is a restraint to keep those in hell from committing horrendous evil against each other. Because of hardened hearts those in hell will grow accustomed to the environment. They will want to stay there. if they don’t want heaven they don’t have to have it. God’s not going to force them. In the end everyone gets what the want. Those in hell don’t want forgiveness. Jonathan Edwards speaks of this in Sinners in the Hands of an Angry God. Those in hell are wicked with hardened hearts. From their perspective hell isn’t so terrible. Part of the misery of hell is the sad fact that those who are in hell do not even realize how miserable their condition is because they have lost the capacity to appreciate genuine happiness.

This acceptable year of the Lord, a day of such great favor to some will doubtless be a day of as remarkable vengeance to others. Men’s hearts harden and their guilt increases apace at such a day as this, if they neglect their souls; and never was there so great danger of such persons being given up to hardness of heart and blindness of mind.

As Edwards states elsewhere n the sermon, Those in hell will hate God and His children.

Just to be clear I think it’s just ONE reasonable option.

It’s like the creature Gollum in “The Lord of the Rings”. The longer he has the ring the more corrupt and hateful he becomes. The more and more doesn’t want to let go of the ring. 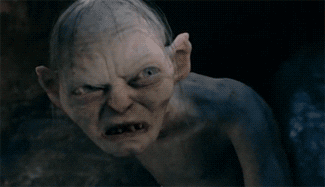 Sinners in the Hands of Angry God, Edwards states:

There are in the souls of wicked men those hellish principles reigning, that would presently ignite and burst into flames of hell-fire, if it were not for God’s restraints. There is laid in the very nature of all unsaved men, a foundation for the torments of hell. There are those corrupt principles, in reigning power in them, and in full possession of them, that are seeds of hell-fire. These principles are active and powerful, exceedingly violent in their nature, and if it were not for the restraining hand of God upon them, they would soon break out, they would burst into flame after the same manner as the same depravity, the same hatred, does in the hearts of damned souls, and would generate the same torments as they do in them. The souls of the wicked in Scripture are compared to the tossing sea, Isaiah 57:20.

I just found a quote by Jonathan Edwards. In preaching on Rev. 6:15-16 he said

Wicked men will hereafter earnestly wish to be turned to nothing and forever cease to be that they may escape the wrath of God.

This may be true at first but as time goes on the heart will grow harder. It doesn’t get softer apart from His restraining power but harder. Therefore the inhabitants of hell will grow more and more accustomed to hell as time goes on. they will want to be there. They will hate God and His children.